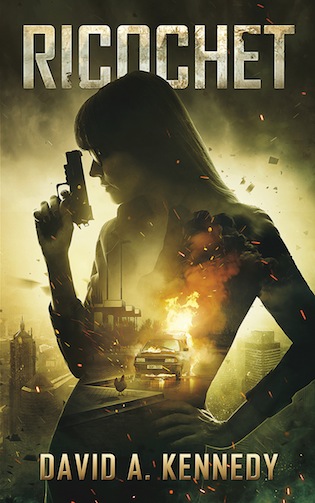 Brenda Roseberry is young, brilliant, and fearless, but her moral compass is radically skewed. Recruited by the secret government agency Special Crimes Response And Mitigation, she delivers twisted vigilantism to the streets and the corporate boardrooms of America. Her only friend, an MS-13 gangster, manipulates her even as he assists her. Will the dark secrets of Brenda’s adolescence and the shocking truth behind SCRAM destroy them both?

Dave is a guidebook writer/publisher turned novelist. He began rock climbing around 1984, which was a “logical” extension of hiking, camping and backpacking since boyhood. After his first article on climbing in San Diego’s back-country was published in Rock & Ice magazine, he created the San Diego County Climbing Guide, which proved extremely popular. Next came San Diego Adventures: Classic hiking, mountain biking and rock climbing. In 2007 he completed and published a second edition of the climbing guide, which vividly detailed over 2,000 routes.

Subsequently, he embarked on a fiction-writing odyssey, producing sci-fi novels and short stories “rather unsuccessfully” in terms of publication. He finally found his proper voice in 2017 when he wrote Ricochet, an intense modern-day thriller about a young female vigilante. Upon its completion, he learned about Acorn Publishing while attending the 2018 Southern California Writers’ Conference and was signed by them shortly thereafter.

David is also an accomplished horticulturist. He became interested in tropical plants called Bromeliads in 2010, which quickly turned into a passion. He is an active member of the San Diego Bromeliad Society, and has won “Best of Show” awards in their annual show multiple times. His Tillandsia collection is considered one of the best in the region. For many years he and his wife Debbie have been chief volunteer caretakers of the San Diego Zoo’s Kent Bromeliad Garden.

Becoming a novelist is the realization of a lifelong dream. David loves the process of storytelling, of waking up each day well before dawn and diving into the art of making words come together in a way that appeals.