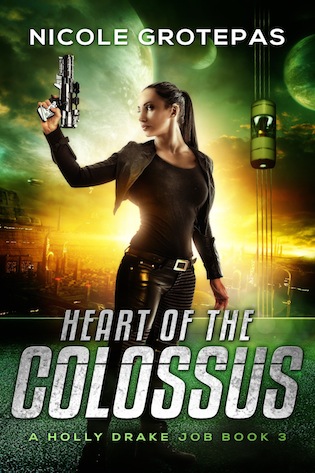 Save them all or die trying.

Holly Drake and her team have seen the evil lurking behind everything the Shadow Coalition does. The last time they plunged into the heart of the shadow empire, they could only rescue one. Now they’re going back for the rest. The crew is ready and willing to put everything on the line. They have a plan, they have the means, this is the job they were born to do.

But time and space are stacked against them.

The mission is a logistical nightmare. How can Holly and her crew save an entire fleet of children? The answer: whatever it takes. Co-opting fuel tankers, recruiting explosives experts, hiring pilots, and revisiting mysterious specters from the past. Some things are too painful, even for Holly Drake, but when it comes to freeing the innocent, not even the ugliest mistakes from her past will hold her back.

Is this the mission that will unveil the true nature of the Heart at the center of the Shadow Coalition? She’s seen the hands, just who is the heart?

“I don’t know how you guys talked me into this, again,” Charly Stout said, her voice coming over the comms into Holly’s earpiece. “Last time was a bust. Nearly died. And yet, here I am, again, floating outside the ship in space, my life balanced on the brink.”

“You love danger, that’s why,” Holly Drake said from inside the ship. She was safe and snug, seated next to Trip Taurus, a Centau and the pilot of the Space Cruiser Olavia Apollo. Charly Stout, a human, and Odeon Starlight, a Druiviin, waited outside the ship, clipped in on the underside, out of sight of the Fuel Depot security cameras. There they waited for Shiro Oahu’s distraction to work.

“At least this time I am with you, Charly. You’re not alone.” Odeon said.

“Aw man, Odeon. You know you always pull through, for everyone, always,” Charly laughed. “Thanks bro.”

“If we weren’t parked for the fill, you’d be in here, Odeon,” Holly joked. “I’m barely getting through this without my fix.” The panic attacks about being in space still afflicted her. She could feel the darkness of fear creeping at the edge of her mind, clawing at her sanity. She glanced at Trip who sat silently beside her, watching the instruments on her control panels. The Centau’s head was tilted to the side, the pilot goggles balanced on her forehead, her beautiful pale brown skin contrasting with the white, blue, and orange of her pilot jumpsuit.

Trip interrupted their banter. “The tank is half full. I hope Shiro is almost ready.”

“Shiro, you in position?” Holly asked, touching her earpiece. The fueling station filled the viewsceen in front of them. Most of what they saw was the giant mechanical arm that pulled in Trip’s ship and kept it secure as the fueling umbilical connected with the ship and filled it with aether. But beyond that there was the central portion of the station where the workers stayed. Inside the station there were a bar, a restaurant, and the people to man those and a few other amenities for commercial ships like Trip’s.

“Nearly there, Ms. Drake,” Shiro said quietly over the comms.

“This is going to cost you, you know?” Trip said, turning to glance at Holly before looking back at the instrument panel.

“We’re going to pay for this fill up, yes,” Holly said. “Don’t worry about it, Trip. You’re practically on the crew at this point.”

“Am I?” Trip asked, leaning back and studying Holly with her bright eyes.

“Don’t get too excited about it. You’re mostly in, maybe still enjoying your trial period.” Holly gave her a measuring glance.

Trip pulled her gaze away from Holly, a smirk touching the edge of her lips like she was disgusted with Holly’s antics. “Just a few minutes more, then she’s full.”

“Everyone be ready,” Holly said.

“Ready,” Charly said, followed by Odeon’s affirmation that he too was ready.

There was silence on the comms and in the bridge of the SC Olavia Apollo. Holly could hear the stifled breathing of her crew as everyone waited for the fueling to finish. There was a sound through the ship as the fuel delivery system finished and the umbilical disengaged.

I’m passionate about human rights, animal rights, and living life with no regrets. I love how becoming a parent has deepened my devotion to making the world a better place. I do that best by crafting stories that attempt to answer hard questions–the ones I think about most–while also being entertaining and fun. I live in a landscape that reminds me of my place in the universe, under an endless sky and towering mountains that are older than human memory, and I love it here.